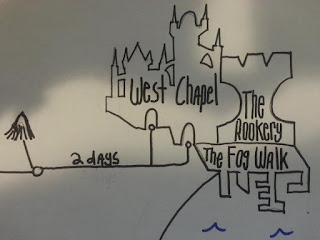 I am taking a stab at a city campaign. It will be built on the bones of Logan Knight's fabulous Corpathium, and Zak's Vornheim with a mechanical structure cobbled together from Justin Alexander's urban crawl musings and Brendan's Hazard Dice. Giants, shoulders, etc.


To the west is an endless, ruin-studded wilderness (the Old Town of Yoon Suin). The mountain to the west is Death Frost Doom. To the east, a sprawling, fragmented megalopolis. Beneath, a dense labyrinth.

The above map fragment shows the party's starting position.

West Chapel is a neighborhood dominated by the Church of the Grey God, an anthro-supremacist religion: a delicious filling composed of equal parts Spanish Inquisition, Nazi Germany, Dune's Bene Gesserit, and WH 40k ensconced in a crust of paranoia, prejudice and Gothic architecture.


I'm a rank novice DM, so this might be a bit over-ambitious. Wish me luck!


Posted by Deadtreenoshelter at 4:11 PM No comments: