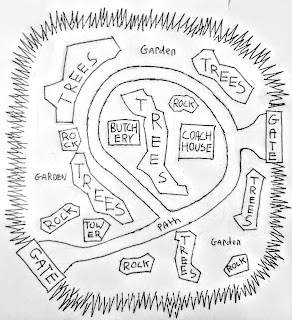 This is the second part of an adventure that I've been working on for awhile. It is inspired by the Warrens zone of Darkest Dungeon.
Everyone knows:  For years, Warren has operated a hog farm supplying the surrounding villages with pork, bacon and sausage. A small still produced harsh liquor. He is a skilled veterinarian who, in desperate moments, has operated on people (the stitches were never pretty but they usually survived).

Unbeknownst to his neighbors, Warren experimented on his stock. With arcane surgeries and cultic ritual, he elevated  many of them to human like sentience. This led to his downfall, when the Swine rebelled, enraged by the torments they suffered.


Now their ranks are swelling. Their hunger drives them ever further afield, in search of flesh to feed the growing horde and satisfy their enormous king.

Read more »
Posted by Deadtreenoshelter at 11:44 AM No comments: