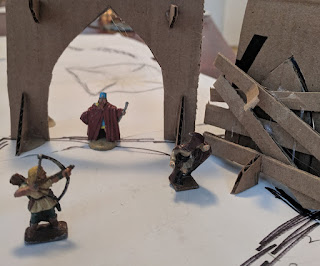 It feels good to be running a game again!

I have finally found a critical mass of players in NYC to get rolling.

We've run two sessions of 5E with 5-7 players each. Only one of the players had ever played D&D before (and that was many years ago as a kid). Most of the group works with my wife in the NY arts world.

I drew the map as we went and glued in the doorways, arches and key terrain features (simple cardboard mock-ups) as we went to give it a 3D feel. It worked really well.  I think it really helped the new players to envision what was happening and where everything was. Plus, all the artists in the group got a kick out of my crappy hot-glue construction skills. 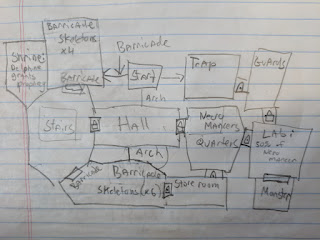 I ran a small dungeon, of my own devising that featured some classic traps and skeleton archers protecting a necromancer and his lab.


So far it's been a lot of fun and my players are engaged and excited. I had intended to play every other week but by popular demand we played two Tuesdays in a row, with the next one coming up in a few days.
Posted by Deadtreenoshelter at 11:35 AM No comments: