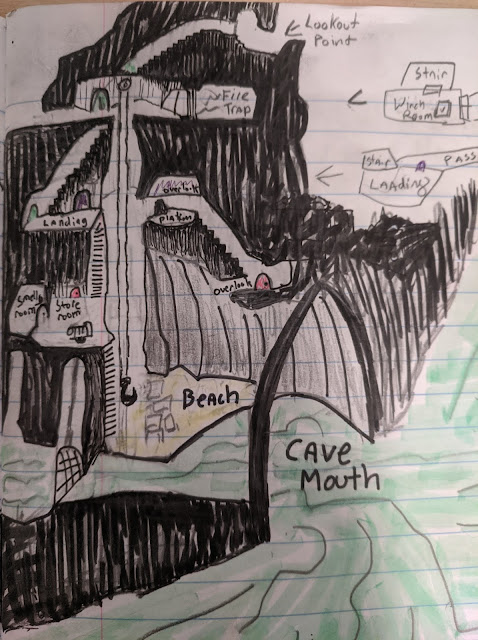 I started brainstorming how to layout the Smuggler's Cave dungeon for Thurstle Island and the doodle turned into something I liked.

It is widely believed that Thurstle Island has only one navigable beach, but several years ago Harald Halfson found a hidden inlet accessible via a system of caves. He recruited friends to help and together they make enormous profits circumventing the Governor's taxes and importing contraband.

The smuggler gang, could be an invaluable ally to PCs who fall afoul of the island's authorities. Alternatively, if the PCs want to hunt the outlaws, their hideout is a small, vertically-oriented dungeon.
Map key below:

Read more »
Posted by Deadtreenoshelter at 6:39 PM No comments:

My usual 5e game has been on hiatus during pandemic lock down and so I've been running Mork Borg online (Tuesdays @ 7:30 Eastern, let me know if you'd like to join). It's been a lot of fun, but it started as a one-shot and so follow-up sessions have been a scramble each week to prep a handful of funhouse encounters and puzzle monsters with little over-arching story.

There's a campaign I've had kicking around in my head for six or eight months and I think that after a few more sessions of Mork Borg, my online crew might be ready for a shift to a regular campaign.

The campaign will take place on an island. I'm aiming for a manageable, self-contained area with a few dungeons, two towns and a sinister forest. It will serve as my first Blob Crawl oriented game. 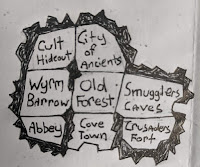 Long ago, when the Giants were as large as mountains. Woden slew the giant Thurstle and threw their corpse into the sea. Thurstle turned to stone and has been an island ever since.


Read more »
Posted by Deadtreenoshelter at 4:28 PM No comments:

When a character levels up in Ultra-Bastard, they gain 1d6 + constitution modifier hit points and gain options from the advancement table for their class. Pick two or roll three. An option may only be picked once per level-up.

As an example, this is the advancement table for the Bastard class which combines the traditional fighter, specialist and mage roles. 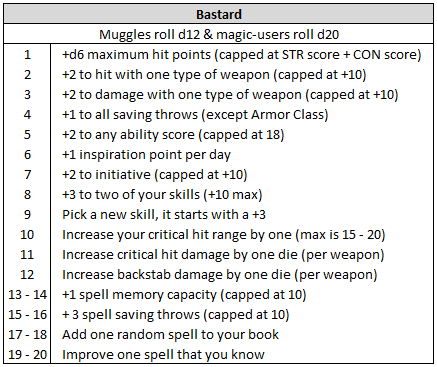 Read more »
Posted by Deadtreenoshelter at 6:59 PM No comments:

Hex crawls in D&D don't work for me. I've tried a few times but ultimately I keep running into the same issues.

I've learned to write good dungeons, but overland travel is a struggle.

Read more »
Posted by Deadtreenoshelter at 2:28 PM No comments: 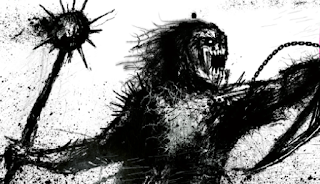 The Mork Borg game, that I started on a whim to entertain friends during COVID lockdown continues. Last night, we ran our 6th session.

Brief re-caps below (including a 10 room dungeon level).
Read more »
Posted by Deadtreenoshelter at 12:57 PM No comments:

In Ultra-Bastard, there is not a limit on how many spells a magic user can cast in a day and there are no spell levels. There are other restrictions on spells and many spells come with a cost.

This is a replacement for my previous unsuccessful spell system and is so-far untested. I am still wrestling with the balance and so this is all subject to revision as play-testing occurs. Feedback and suggestions are welcomed.

Spells Known: Every mage has a spell book (or perhaps a bag of scrolls or something similar) and they can cast any spell that they have recorded in their book.

Memorizing Spells: Mages can memorize a number of spells equal to their intelligence modifier.  Mages can spend a rest attempting to memorize one spell (an intelligence check).

Casting Spells: Spellcasting is draining. Every time a character starts casting a spell, they lose one hit point.
Material Components: Spells require material components which are consumed during casting. Unless specified in the spell description, the components required are basic, interchangeable and easily purchased in a normal town. If playing with encumbrance rules, one inventory slot can hold sufficient components for three spells.

Posted by Deadtreenoshelter at 6:47 AM No comments: 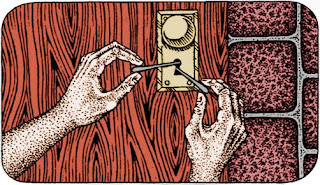 Skills in Ultra-Bastard are open-ended. This whole sub-system is optional.

The DM should offer players guidance on whether skills are likely to be useful in the campaign. I.e. if the game will focus primarily on dungeon exploration, woodsmanship might not be helpful.

Read more »
Posted by Deadtreenoshelter at 1:33 PM No comments: