What I Learned from the Beastly Boys 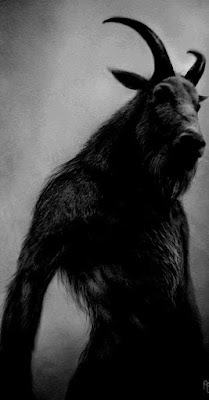 A few weeks ago, I submitted an entry into Prince of Nothing's "No-Artpunk Contest". The final outcome of the contest is still pending, but Prince has provided his judgment on my entry and his assessment has been augmented by several critiquing comments from the Fundamentalist tribe.

I enjoyed putting together a dungeon within the contest constraints and I learned a lot from the process  and the critique my entry received.

The conceit of this contest pits two branches of the OSR tree against each other. On one side, the Art-punks, and on the other an un-named group that I think of as the D&D fundamentalists.

Although Prince describes me as a "self-professed Artpunk connoisseur" I do not think of myself as a member of that camp. My adventures don't include reflections on the nature of deep-time or parodic personifications of debt-slavery. I'm not trying to sell my dungeon maps at Fredericks and Freiser.

The adventures I make are not deeply conceptual, they're mostly in keeping with the mainstream of old-fashioned D&D.... Fight smugglers in caves, clear a haunted lighthouse, explore a temple, plunder a burial mound. 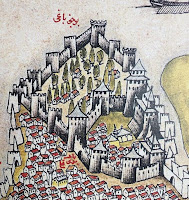 However, I'm clearly not a Fundamentalist either. I don't run my games with the received Rules As Written and my games' procedures are pretty loosy-gooosy. I eagerly kit-bash on bits and pieces from all sorts of other rule sets be they actually old rules (i.e. B/X), modern-trad (i.e. 5e) or the various indie/story-games (i.e. Apocalypse World).

I hang out in OSR spaces because I like a lot of the content being made, but my actual game is at most 50% old-school.

I think of myself as an ultra-heterodox Universal Harvester.

My entry, Baleful Bastion of the Beastly Boys is my attempt at creating a low-level, bog standard but still fun dungeon. Prince compares it to T1: The Village of Hommlet's Moat House dungeon and it's an apt comparison as this is precisely what I'm trying to emulate and riff on.

The presentation of my dungeon differs significantly from what you'd find in the adventures from the actual Old School days. I tried to model the layout on the DM notes in my notebook rather than the (to my eyes) kludgy, dense paragraphs of early modules.

My hope was to keep what was good about the old modules while updating the functionality of the text.

Prince's thorough review was super useful to me. It highlighted several weaknesses in my adventure and perhaps even more interesting, held a spotlight on several areas where my priorities differ pretty widely with the Fundamentalist OSR orthodoxy.

There is all sorts of fuckery going on with the format, and the liberal use of bullet points, the squiggly room titles in the actual rooms and the descriptions that are irregularly spaced around it... The black hand weighs on Beastly Boys’ presentation like a millstone.

I'm going to have to disagree with Prince here pretty strongly. Is my formatting pretty? No. Is it radically more functional than the original stuff. Absolutely yes.

Prince brought up Hommlet as a point of comparison. It's among the most beloved old modules and it's one that I've actually run.

As presented, Hommlet is a pain in the ass. It requires a significant amount of careful pre-reading, preparation and re-statement to be playable. I used the invaluable cliff-notes maps prepped by Daniel of ggnore podcast fame but if they hadn't been available, I'd have needed to make something similar for myself.

The format does allow a great deal of information to be conveyed on each page in a manner that can be perused reasonably well, but some of the innovation is questionable. I see little information being gained from using the room title instead of the more sensible numbered room keys

Having played flip-around-the-module games with the OG Hommlet, I couldn't disagree more. The arrow references are much easier to read at the table. That said, I had meant to include room numbers in addition to assist with cross-reference, i.e. "The ogre will move from here to Room 2: Guard Post" You can see on my maps that I started numbering the rooms on the ground floor and forgot to include them later on.

It is more or less understood that if you make a dungeon map it need not confirm 100% to a realistic depiction of ancient architecture. We are often willing to suspend disbelief about the myriad architectural inefficiencies of a temple as long as it has an altar, the high priest has some quarters and there is some sort of inner sanctum. With fortresses I feel one needs to be a bit more stringent, and Bastion has the problem that its architecture doesn’t make that much sense. Some more castle-like features (a wall, a moat, a courtyard etc. even if broken) would have added some verisimilitude to the thing. Adding some (semi) empty chambers or storerooms would also have given the bastion a bit more room to breathe, making it feel less cramped.

I mostly agree with this on principle. A little more review of actual castles and a little more empty space could improve the map. On the other hand, real castle layouts are often TOO defensible. They incorporate so many bottlenecks, dead-ends and cul de sacs that they don't always offer the flow of a properly Jaquay-ed space.

While we're throwing stones at irrational architecture, let's do a little compare and contrast:

Neither of these is quite realistic but I feel like one might be a little bit closer to actual castle architecture:

Jonathan Becker suggested UK3: The Guantlet as an exemplary old-school keep and it looks rad. Definitely, going to check it out.

The map has no scale. Scale, fixed distance, scope, resources, consequences. This is the thin line between playing AD&D and playing fucking Dungeon World. The lack of a scale is all the more lamentable because the adventure does something good, it places a great deal of treasure in a hidden vault in the basement that can be discerned if the PCs do proper mapping…but how can they map properly if there is no scale? A shame. Doors are not marked on the map, even when they clearly should be.

Later in the comments he continues:

I will say that a scale is recommended, and for a dungeon I consider it almost a necessity (to measure Turns). You can omit it but that in turn fucks with movement which fucks with encumberance etc. etc. It’s not a disaster but I can think of few occasions when scaling a map does not improve it.

From Jonathan, also in the comments:

I was blindsided by the importance that the true old-schooler's placed on a rigid scale. For me, precise room dimensions are not at all important. I run my random encounters based on number of rooms traversed, not by counting feet moved.

I understand that there's a branch of old-school play that celebrates meticulous player mapping but if my players ever spend twenty minutes carefully graphing out the exact dimensions of a room, I'll quit D&D. Life is too short for tedious geometry fidgeting.

All that said, adding a scale takes two minutes and if it helps make my dungeons more useful to a broad range of other DMs, I'm happy to do it.

The comment on doors.... 100% mea culpa. It's a big oversight and significantly weakens my map.

When picking up a pre-written adventure for use at the table, I think there’s some practicality in having thoughtful, appropriate loot pre-placed by the adventure’s author. If I were running a module that referred me to random treasure tables (and assuming that I still wanted to run the thing for my group), the first thing I’d do is nail down what’s present BEFORE play began. The “surprise at the table” thing? Mm. Not worth the potential headache.

I totally agree with these criticisms. My use of OSE table treasure was an attempt to ape the style of old modules and frankly it sucks. Coming up with better treasure would definitely make the adventure better. I wrote a "Search the Body" table (a new-OSR standby) that I think is pretty good and supplementing it with a d10 table of flavorful larger treasures would have been easy to do and worthwhile.

This contest was a blast. I doubt I'll make it into the final winners' circle but I'm really glad I participated.

The Fundamentalist branch of the OSR has a lot to offer when it comes to adventure design and critique and I'm grateful to have gotten their perspective on one of my creations. I am really enjoying reading the commentary on the other entries too and I think the comment sections on these posts have been robust and productive.

The ways we differ in what we want an adventure to do seem to exemplify what Gus L highlighted in a post a few months back. I think the shorter sessions I play (2-3 hours) often with limited time for prep on game-day (I make my dungeons at leisure, often months before use) give me little patience for block text and fidgeting with room sizes. I need to be able to pick something up and run with it without pre-reading. Additionally, I play online and reveal a map piecemeal as players progress so they don't need to map precisely (a fairly core activity in certain branches of old school play).

I hope this is merely the first of many opportunities for us to share our dungeons for them to be picked apart by the old-guard. The old-school is a good place to learn and I'll jump at the chance to get their help in honing my dungeon-making craft.

Posted by Deadtreenoshelter at 9:50 AM