All the Doors Round Here

Weird doors in dungeons are fun.

A large stone disk, well balanced on a central axis, spins within a round cutout. Alcoves cut into the disk allow a person to move with the disk and transit between rooms.

Why this is great:
A few nifty alternatives:
The alternative exit from the spinning door might not be immediately found if approached from the south but likely to be discovered easily if returning from the north. 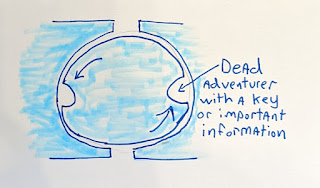 Once one of these doors has been discovered, they'll be recognizable even if not in their original position. The out-of-position alcoves can hide treasure (or a trapped monster). 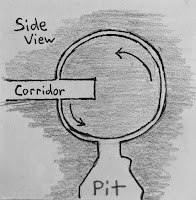 Rotated to a vertical spin, the disk door can be a tricky trap.
Posted by Deadtreenoshelter at 12:25 PM