The Slothful Arbus, Galumphing Compheathalan and

The critter names were created by mashing together the first syllables of 1d6 random Wikipedia article titles.

The first creature I rolled up had a multicolored insectoid body with a suckered hide, 5 eyes and multiple beaks. Thus, the arbus: 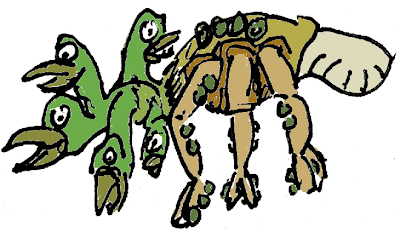 Arbuses use the suckers on their backs to adhere to the underside of branches or mossy cave roofs with their legs dangling like vines. They wait for prey to pass underneath, drop on them from above and attack with their beaks.

The next creature I rolled was a feathery brown plant creature with 5 eyes and multiple suckered mouths. Introducing the compheathalan: 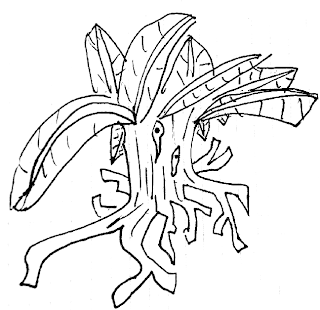 This strange feather-fronded tree looks very out of place in the icy glade where it lurks. Beady eyes stare out from crevices in its trunk and when it spots movement, it uproots itself and ambulates at an alarming rate on a swarming mass of its roots. It runs over the top of its prey and a host of small mouths at the nexus of its roots strip the victim clean of flesh.

The compheathalan's tiny eyes can only see moving objects.

It has been eating local villagers for years, so unless adventurers have angered the populace, they are likely to be warned of the vegetal predator and rewarded for its destruction.

Finally, a four-eyed fish-bodied flier with a circular gaping maw. Not that any campaign world really needs another flying land shark, but that's what came up on the dice. 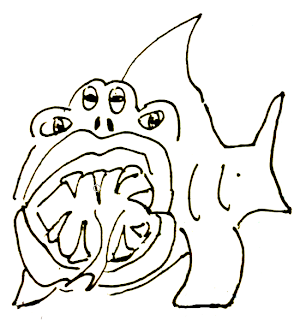 A fierce, flying fish found far from the surf. The augmy floats over the fecund Flats of Flubel.  If found, flee!

Posted by Deadtreenoshelter at 11:23 PM