I have been thinking a lot about traps.
My games tend to be fairly crawly. Dungeon crawls, blob crawls, forest crawls. Always crawling.
Traps are an iconic part of the crawling mode of play but it's easy for them to be boring or frustrating.
The key to making traps fun is to have a clear idea of what you are trying to add to the game play by placing a trap. There are three distinct reasons I use traps: as obstacles, as set-ups and as resource taxes.
It's also worth mentioning that I never use traps that punish players for insufficient caution. Game time is scarce and I don't want to waste it tapping the walls and examining floor tiles.

My players like figuring out how to circumvent threats and a trap that is easy to detect, tricky to disarm and blocking a path the players want to take is the perfect way to get them thinking "How do we deal with this?"
This is the type of trap Ben Milton recommends in his recent video. He advocates eliminating any detection step and letting players jump to figuring out a way around your hazard. "As long as they're thinking, they're going to be having fun."
I usually give an obvious clue that there is a hazard but let the players deduce what exactly the threat is and how it works. I have a couple engineers in my group that dig this.
An example from my Mork Borg game: A large stone moai head in the middle of an intersection turns and breathes fire on anyone entering the intersection (based on a post from Dreams in the Lich House). The floor tiles are burned in streaks emanating from the moai.
This is my favorite type of trap and if you have good examples that you have used, I would love to hear about them.

The goal with a set up trap is to enhance a normal combat encounter by knocking characters off balance or putting them in an awkward situation when the fight begins. Classic examples of this are a portcullis that slams down and splits the party just as bugbears spring their ambush, or a spring snare that yanks a party member up into a tree and alerts nearby enemies.
It is occasionally fun for player characters to sneak up on a monster waiting in it's 10x10 room and ambush it. More often, it's fun for monster encounters to happen in the midst of an already dynamic situation. This is DMing 101, but spicing up encounters by adding multiple moving pieces, took me a while to learn.
These traps would not be dangerous except that they put the party at a disadvantage at a critical moment. Often they split up the party or restrain someone. 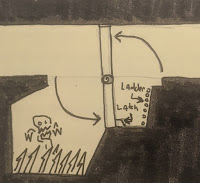 The flip trap in my barrow dungeon is a good example. The leading character or two get dumped into a spike pit and immediately face skeletons while their allies are cut off from them, desperately trying to figure out how to get around the trap to help. It's a dramatic start for a fight.
Another example is the ravine ambush that I posted several weeks ago.
Set up traps work because they force characters to respond to multiple threats, requiring different solutions at the same time. Again, interesting choices are what creates fun.

I play dungeons as a resource management challenge with a strong push-your-luck dynamic. Traps can wear down player resources and ramp up tension.
Tax traps serve a similar role as wandering monster checks but should be much faster to resolve. Wandering around in the dungeon wastes HP and healing and risks irritating conditions.
The key for me is that these should soak up minimal game time. They are not that fun in themselves, they are used to raise the stakes for other conflicts. To that end:
The Click rule adds a bit of tension and player choice (even if it's often a blind choice).

The key to a good trap is knowing what it's for. Either it should be a fun challenge offering real choices or get out of the way as quickly as possible.
Are there other categories of fun traps that I'm missing?
Posted by Deadtreenoshelter at 5:04 PM