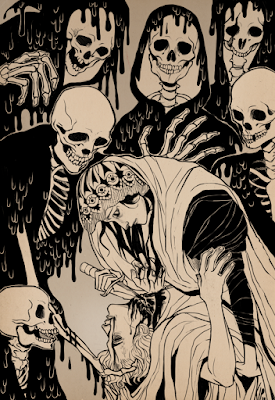 In the same way that all humans grow to maturity with an instinctive knowledge of mankind's common tongue, and every beast knows, without being taught, the language of its kind, so it is with skeletons. They all share the same rattling, teeth-clacking "speech."

Skeletongue is an easy language for others to learn. The difficulties of pronunciation that come with other languages are irrelevant and the natural vocabulary of the language is very small. The precise rhythms can be tricky to imitate at first, but once the cadence is found, the rest of it usually proves straightforward. At the more demanding schools of necromancy, students are expected to master the language in less than a month.

The written langue is similarly rudimentary. The traditional script is just a line of dots and dashes.

Of course, such a simple language comes with a number of disadvantages. It takes a long time to say anything complex. Nuance and tone are next to impossible to convey (This is an unfortunate, given the lack of facial expression for most of its speakers.). Finally, the language has very limited variation in volume. You cannot shout in Skeletongue.

Given these limitations, skeletons use gesture and pantomime to indicate emotion and communicate in loud environments. As a result, emphatic conversations often looks like a comical, gesticulating dance to outsiders.

Although skeletons themselves never do it, others who know the language can use it to communicate by tapping stones together, or even flashing a light. Relays of signal lamps, communicating via skeletongue, have become popular in some regions as a method of long range communication. 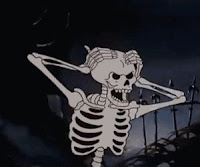 Posted by Deadtreenoshelter at 9:41 AM

Email ThisBlogThis!Share to TwitterShare to FacebookShare to Pinterest
Labels: monsters